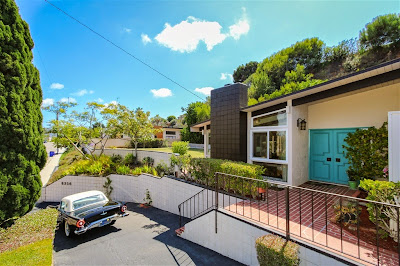 Happy Memorial Day to everyone! Today’s Million Dollar Monday features a 1961 Palmer & Krisel-designed home in the La Jolla Scenic Heights subdivision in the beautiful seaside community of La Jolla, California. This solid mid-century modern was a one-owner home sited high on a double-wide flat lot overlooking Sugarman Drive. This Drogin Construction Company-built home is 2,086 square feet with three bedrooms and two bathrooms and a two-car garage on just over a half-acre flat lot. Asking price is $1,484,000. 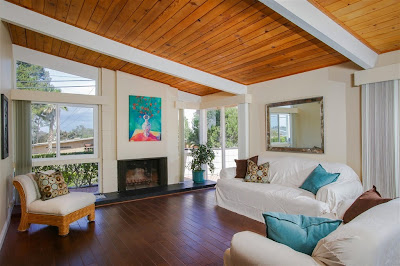 There’s a sweeping driveway that pulls you through the tiers of double-scored cinder block landscape tiers up to the front doors as you enter off of Sugarman Drive. The front doors feature the original square escutcheons over period flat panel doors, and are painted in a fun mid-mod turquoise color. The home strongly reads as a Krisel from the street view, with a fantastic roofline and presence.
The original crinkle-glass clerestories have recently been replaced with clear, presumably dual-pane white vinyl windows, which does change the intended architectural look of the home somewhat. The original look can always be recreated with adhesive film, but unfortunately there’s nothing quite like the original on these mid-mod homes. The front chimney features a wonderful subtle feature – nine of the blocks on the vertical left side of the exterior have been pulled forward slightly creating a slight shadow line. 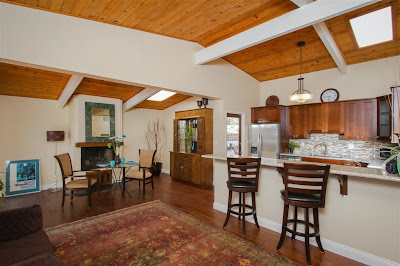 Inside, there have also been a few more recent updates, including a new wood floor and thick, ornate baseboards. Typically mid-century modern architecture was about clean lines with a lack of ornamentation, and eyes were meant to be drawn through a space, not down to the floor line. Interestingly, the original open-beamed ceilings are still in place, however trim has been added at the beams creating a curious detail. 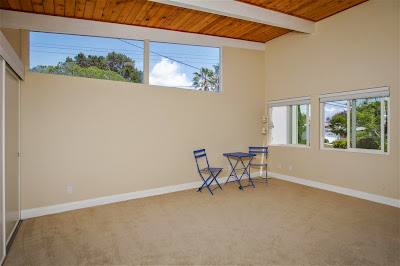 Luckily the living room features that knock-out signature Krisel fireplace, and barely visible in the photos is a small in-hearth planter filled with white rocks – very mod. The kitchen has been updated in a functional way – the backsplash is definitely on trend while the cabinetry sticks out as being somewhat traditional for a mid-mod home. The bathrooms have also been updated, however neither the kitchen updates nor the bath create any real value – they both don’t fit the home stylistically and create a situation where the new owner is essentially forced into a immediate renovation. There would have been more value if the originals were still in place, presuming condition was good. There’s also a breakfast nook/family room addition off the kitchen with its own fireplace, and care was taken to mimic the open beamed ceilings. 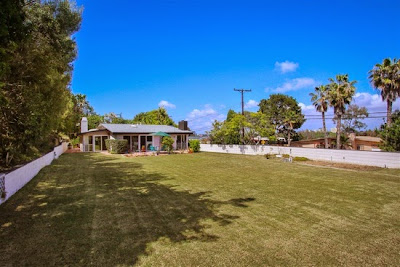 Out back, the yard is flat and grassy, and is actually located on the ‘side’ of the home, visible from the front and entry. This is a great home; however, it’s unfortunate that the white vinyl window, baseboards, kitchen and bath updates were made as they just don’t fit the house right. This could have been a great renovation but was definitely misguided. The price is one of the best in the area, and will no doubt be the leading factor in the sale – which means the new owner can afford a fitting renovation & make this property shine like the stellar gem that it is.

Or Zillow here: 8356 Sugarman Drive
Posted by Krisel Connection at 6:00 AM