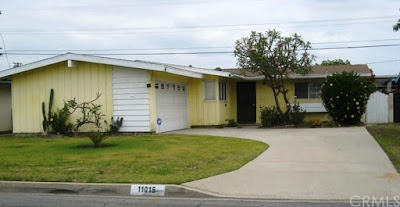 We’ve found the 1954 Palmer & Krisel subdivision of Bartley Grove Estates in West Whittier, California. Listed in the Krisel Archives at the Getty Museum as being located in Downey, Bartley Grove Estates lies within unincorporated Los Angeles County between the Cities of Whittier and Downey, utilizing Whittier as a mailing address. This made it tricky for us to track down, but after an extensive search we found it and here’s the first home we’ve seen for sale in it. 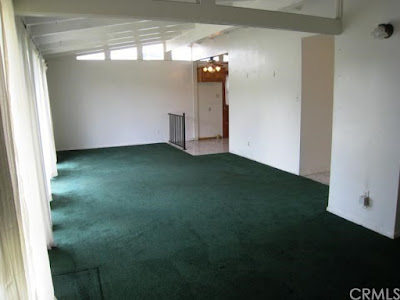 This is a 1954, 1,254 square-foot home squeezing in three (originally four!) bedrooms and two bathrooms plus a two-car garage all on a tidy 5,400 square-foot lot with an asking price of $390,000. This home features a couple of unique design quirks in addition to the usual Krisel hallmarks. The garage features an off-centered white clapboard siding breaking the standard board and batten façade, while the corner window to the left of the front door was a feature that many other southern California mid-century builders used. Its rare (but not unseen) for Krisel homes to have this feature, along with the double, slightly off-center roofline of where the garage intersects with the dwelling portion of the home. The most surprising Krisel feature not seen in this home (and the entire subdivision for that matter) is a fireplace – usually a living room staple. 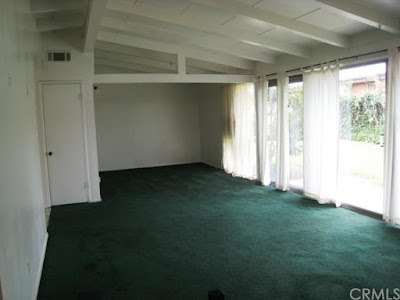 There’s not many pictures of the home online so there’s not much to describe, but inside there’s quite a few Krisel traits. Like many of his Southern California homes, there’s no direct access between the home and the garage. The open, vaulted beamed ceilings are still intact, as are the clerestory windows at the east and west ends of the home and the walls of glass in the living areas at the back of the home. The fourth bedroom has been annexed by the living area; however the trusses are still in place creating an interesting added architectural feature. 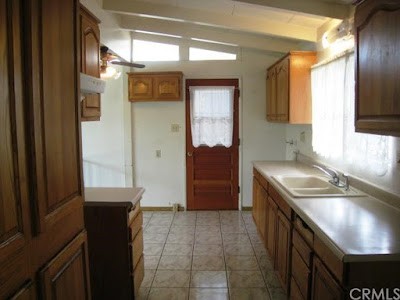 The kitchen appears to have been updated in the mid to late 1990s, and there’s some fun retro teal carpeting throughout the home. Who knows what condition the bedrooms and baths are in as there’s no pictures. The laundry, most likely originally in the kitchen, has been moved to the garage, while the backyard appears lush and grassy. The listing agent doesn’t seem to be aware of the architectural signifigance of this home, and has humorously noted it as a ‘traditional.’ That just means more mid-mod for the rest of us!

There’s not many photos, but you can check out the Redfin listing here: 11015 Abbotsford Rd

Or Zillow here: 11015 Abbotsford Rd
Posted by Krisel Connection at 6:00 AM