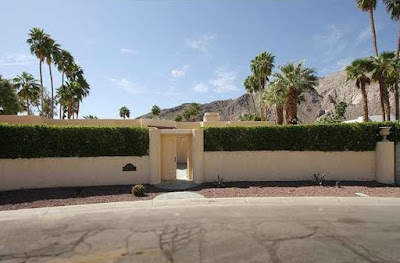 In 1998, before mid-century modern became ‘in’ again, this Palmer & Krisel-designed home built by the Alexander Construction Company in Palm Springs, CA underwent a massive renovation and expansion. Expanded from its original 1,600 square feet, this home now features three bedrooms and three and a half bathrooms in 2,718 square feet, a two car garage, an in-ground pool all on a 12,100 square-foot lot with an asking price of $1,095,000.

The home is great for those who value privacy. Situated at the knuckle of two intersecting roads, a low wall surrounded by a lush, green hedge separates the home from the street with gates at the front driveway and entry walkway. Behind the front hedge the front yard is low-maintenance and under-utilized gravel waiting for personalization.


Walking into the home, the living, kitchen and dining areas retain their basic original form and location, all with 1998 updates. The living and dining rooms still feature their signature original walls of glass overlooking the backyard pool area. The fireplace is still in its original location, however the signature modernist blocked form has been modified with large, heavy rounded turrets, a theme established for many other corners throughout the home.


The kitchen has been upgraded and expanded, with a large central granite-topped island, walls of cabinets and skylights have been added for additional light.

Two of the bedrooms have been converted and expanded into master suites, with their own sitting areas and private baths. The baths embody the 1998 renovations made on the home, but are large, clean and functional. The larger of the master suites incorporates its own private fireplace, while the third bedroom retains its original form and location.


The backyard is anchored by the original rectangular Alexander pool, has an added spa and lots of red brick patio space. There’s not much greenery, except for some privacy hedges and a long, linear raised planter behind the swimming pool.  One of the best features about this home are the mountain views to the south and west, which are breathtaking, dramatic and inspiring.

There’s plenty of opportunity with this home to enjoy it as-is, or embark on the endeavor of returning it to its modernist mid-century roots. The yard is a blank slate awaiting a transformation, and is perfect for enjoying mountain views and tranquil evenings. This one’s been listed for quite a while now but it’s a great opportunity for those with vision.

Check out the full listing on Redfin.com here: 879 Camino Sur