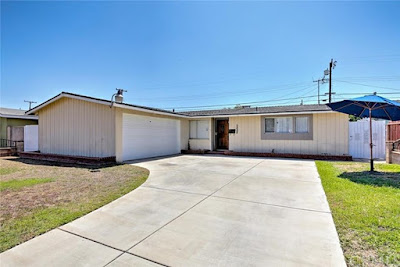 Built in 1955 by Louis Lesser Enterprises, this 1,190 square-foot Palmer & Krisel-designed home in Buena Park, CA packs three bedrooms (originally four) and two bathrooms under one roof with a  two-car garage on a 6,000 square-foot lot with an asking price of $499,000.

Outside, this home could use a little TLC in the landscape department, with its patchy lawn and block and metal fence enclosing the front yard. The exterior of the home features dramatic vertical board and batten siding, creating strong shadow lines and a great mid-century aesthetic. The high pressure sodium light at the garage is a bit over-scaled and not in keeping with the residential nature of the property, and the block fence is unwelcoming, but both are an easy removal for the new owner.

The living and dining areas sit at the rear of the home, while the kitchen is just off the entry. Several long, high, rectangular openings with decorative spindles have been created between living room and kitchen, allowing the two spaces to be open to each other while still providing privacy. The living room is anchored by a modernist flush-mount fireplace surrounded by a simple thin steel square ring to which an ill-fitting mantle has been added. The firebox is purposefully off center and has been accented by large floor tiles, which originally would have been one-inch mosaic tiles.


A large enclosed porch has been added to the living room, which cuts the amount of south-facing natural light entering the home but adds additional living space onto this efficient home. The dining room has been carved out of the former master bedroom, and it’s west-facing clerestory windows have been covered up. As the dining room was the former master, it also features a full bathroom and the original closets are still intact.


The kitchen features a lowered ceiling and has been laid out half-galley style, with raised panel cabinetry and granite counters. The laundry area sits at the end of the kitchen and features a door access the service porch and garage.


The backyard is just as sparse the front, completely devoid of shade trees or softening shrubs. It’s an open blank slate waiting for a water-wise modernist makeover. This home has some fantastic clean lines, and is ready for a new owner to breathe new modernist life into it. It’s move-in ready and will make a perfect long-term project or immediate restoration.

Check out the listing on Redfin.com here: 5888 Los Ranchos Drive

Or on Zillow.com here: 5888 Los Ranchos Drive
Posted by Krisel Connection at 6:00 AM