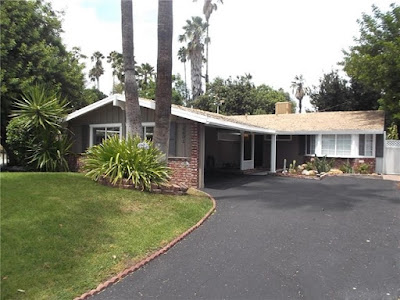 Built by the Alexander Construction Company, Corbin Palms has long been regarded as the initial benchmark tract home community for the architectural firm of Palmer & Krisel, cementing their position as one of the leading modernist architectural forms on the west coast. This particular home is a 1,392 square-foot model F, with three bedrooms and two bathrooms (originally four bedrooms – the fourth bedroom has been removed providing additional square-footage to the living and dining areas), a two car carport and an in-ground pool all on a 7,500 square foot lot with an asking price of $599,000.


This home retains its lushly landscaped front yard, with mature plantings including original palms. Over time, some modifications have been made to the front exterior of the home, including red brick veneer, a white picket fence, a porch rail near the entry and a bay window at the master bedroom. The remainder of the exterior of the home looks to be original – even the roof retains the original look by maintaining a rock covering.


Inside the home has been updated in a sort of traditional ranch-style that isn’t necessarily midcentury modern, but works for the property. The fourth bedroom has been opened to the living and dining rooms, with access provided to the kitchen. The original open, beamed celotex ceilings are still intact, as is the original signature Krisel-modernist fireplace and lighting soffit. The original doors and windows have been replaced with small-paned mullioned models.


The kitchen sits at the front of the home and features granite countertops, squared raised-panel cabinetry and stainless steel appliances. The kitchen also still includes its original clerestories which add lots of natural light to the space, and the vintage diamond-pane x-panel ranch house door add a great midcentury touch to the room.

Both the guest and master bathrooms have been renovated in a traditional style, with oil-rubbed bronze fitureres and combination of beige and white tiles. The only curious feature is the mirror in the guest bath, which projects from the wall and blocks a portion of the window. All three bedrooms feature dark engineered wood floors and open ceilings.

The backyard features a large, in-ground swimming pool, lots of covered and uncovered patio space and low maintenance landscape. The pull-through carport has been converted to a one-sided entry carport, creating a large patio space just off the kitchen nook. There’s even a traditional midcentury ranch-style pole mounted coach light just beyond the kitchen door that we think is pretty cool and retro. 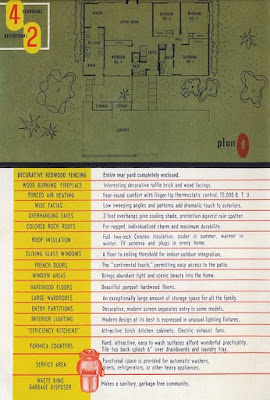 Corbin Palms is one of the quintessential modernist housing tracts in the San Fernando Valley and a fantastic piece of architectural history. This move-in ready home is ready to be enjoyed as is or renovated with a nod to it’s modernist roots.

Or Realtor.com here: 19801 Gilmore Street
Posted by Krisel Connection at 6:00 AM