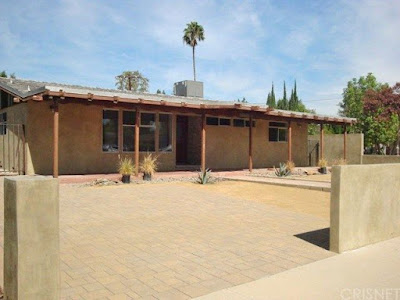 Marlborough Palms is an approximate 31-home subdivision located in Granada Hills, CA in the northern portion of the San Fernando Valley with just a handful of Palmer & Krisel homes built in 1956 and 57. This particular Palmer & Krisel home in Marlborough Palms was built in 1956, features four bedrooms, three bathrooms in 1,824 square feet, an in-ground pool and a detached two-car garage on a 7,500 square-foot corner lot with an asking price of $599,950.


The first line of the listing agent’s description is that this home is not a flip; mainly because it most certainly looks like one. That aside the home almost reflects more of a western theme than anything – a first that we’ve seen on a mid-century contemporary. The front of the home features a full-width covered porch, a low maintenance drought-friendly front yard landscape and an uncovered two-car driveway.

The front of the home has recently been re-stuccoed with a beige stucco finish after recently having a non-original red brick veneer removed. The entryway has been covered in stone tiles which surrounds a darkly stained Victorian-style front door.

Inside, there’s not many original elements remaining, with the exception of the clerestory windows and the exposed, open beamed ceilings. The living and dining room are at the rear of the home, and an addition has been placed at the rear of each. While the addition adds square-footage, it diminishes the amount of light which enters the living room. The signature Krisel fireplace has been modified from its original modernist form into a more generic, standard format with stacked stone tiles and a ceramic-tiled surround.

The kitchen has been updated with dark cabinetry, granite counters and stainless steel appliances. An island has been added between the kitchen and front-facing family room, which appears to serve more as built-in table than valuable counter space.

The bedrooms at the rear of the home have had square-footage added to them from the same addition off the living room, however the additional square footage is neither the same shape as the original bedrooms nor does it contain the same floor covering as the ‘main’ part of the bedrooms which really divides the space unnecessarily.

The bathrooms have been redone in the same style of the rest of the home, featuring granite counters, beige tilework – with the exception of one black-tiled shower - and newer fixtures. Out back there’s a large in-ground pool with a curious, jagged arrangement of rocks at the edges of the pool. The detached garage sits in the backyard, and the backside of the garage had had a covered porch and rustic stone fireplace and hearth added to it.

We’re not sure where to start with this one – this is the first western-flip-themed Krisel we’ve ever seen. On the plus it’s move-in ready and any restoration can take place at the new owner’s pace, making it a perfect long-term project.

Check out the listing on Redfin here: 10625 Montgomery Avenue

Or Realtor.com here: 10625 Montgomery Avenue
Posted by Krisel Connection at 6:00 AM