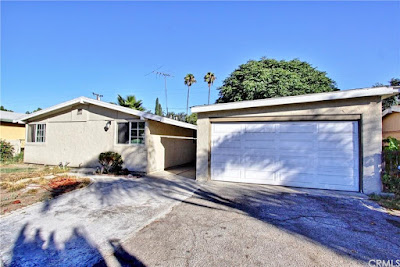 Consisting of just over 500 Palmer & Krisel-designed homes built in 1955 by builders Weber-Burns, Valwood Estates offers relatively affordable modernism in western Pomona. Homes varied between three and four bedrooms, and after 60 years and generations of families, these homes oftentimes need a little bit of work to make them shine. This particular 1955, four bedroom, two bathroom home is 1,200 square feet in size, has a detached two-car garage and sits on a 6,000 square-foot lot with an asking price of $329,800. 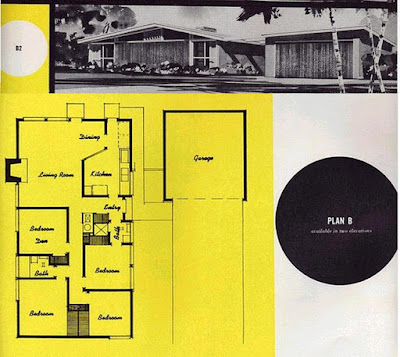 The plan of this home is a Valwood Estates Model B2. The beams connecting the home to detached garage have been removed, the clerestories from the north-facing front have been covered, and the original floor-to ceiling four-pane bedroom windows have been replaced with shorter white vinyl mullioned windows. For some reason, this type of window seems to be a favorite in Valwood Estates, as is building a wall or fence along the front property line, as this home features.

Inside, the property was flipped back in 2011, and features many flipper hallmarks. The signature Krisel beamed celotex ceilings are still in place and exposed in the bedrooms, but everything else has been updated with little regard to the architectural style of the home. The kitchen has been opened up to the combination dining and living room, which ordinarily is at the sacrifice of privacy; however in this small floorplan it actually helps create more usable space.

The fireplace has been updated, and no longer incorporates it’s modernist styling without a mantle; instead it’s given way to a traditional surround with beige tile, carved wooden detailing and a mantle. French doors and half-height windows replace floor to ceiling sliders and four-pane windows, which cut the amount of light let into the home. The kitchen features white raised-panel cabinetry topped with overly ornate molding, granite counters and white appliances.,


Four bedrooms in 1,200 square feet is a tight fit for any designer, and this home still squeezes them in in their original configuration. Unfortunately the clerestories were removed at the front bedrooms, which sacrifice the amount of natural light that would have flowed into them as well as helps them appear as small as they are. The bathrooms have been updated with materials that are indicative of big-box stores, but are clean and functional.


The backyard contains a few mature trees, a covered patio and a varying combination of wooden and block fences. The ground areas are a combination of bare earth or concrete patio, which leaves plenty of room for new landscape opportunities. There’s plenty of opportunity to restore an affordable piece of modernism in Pomona’s Valwood Estates, and this could be a great restoration candidate.

Check out the full listing on Redfin.com here: 2292 Concord Avenue

Or realtor.com here: 2292 Concord Avenue
Posted by Krisel Connection at 6:00 AM