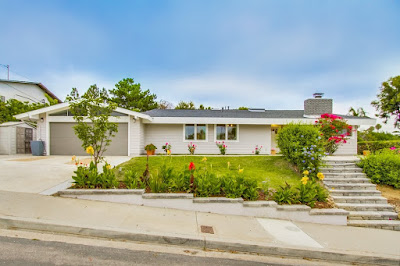 Today’s Million Dollar Palmer & Krisel designed home is in the La Jolla Crest neighborhood just north of Pacifica, with ocean views from the front yard. This home last sold for almost half the current asking price in 2011, and has been thoroughly renovated. At an asking price of $1,645,000, this home includes four bedrooms and three bathrooms in 2,062 square feet, a two-car garage and an in-ground pool all on a 10,400 square-foot lot.

The home retains the same basic floor plan and shape as it originally did when constructed in 1962. The original aluminum framed windows have been swapped out for chunkier white-vinyl models, while the exterior face of the home which once featured brick veneer and large-paneled wood siding has been replaced with horizontal clapboard siding. Recently reinstated is the two-car garage, which had previously been additional livable square footage with two large sliding glass doors where there garage door now is.

The owners have chosen to treat the home as a traditional modern ranch, removing most midcentury modern remnants and Krisel hallmarks that were once in the property. There was an indoor glass atrium between the entry and kitchen stuffed with tropical plants, similar to what we seen in the Sandpiper Condominium atrium models in Palm Desert. This area has been claimed as livable square footage, and now houses a very visible and very central built-in desk.

The living areas and the bedrooms of the home still feature the original open, beamed vaulted ceilings helping to dramatize and expand the existing square-footage. The living room sits at the front and side of the home, and while it still features the fireplace, has lost its signature Krisel modern well-designed form in favor of a simple box. Originally, the fireplace would have featured an exaggerated horizontal surround extending to the wall at one end, offset by a narrow floor-to-ceiling window at the other end, and anchored by a long, low hearth extending the full length of the wall.

Now that the atrium has been removed, the living, dining and kitchen all blend together in one large space, extending the full width of the south half of the home. The original sliders have been replaced with full-width opening glass panel sliders, which are a pretty neat feature. The kitchen is new, done in a traditional/country style with white and grey cabinet boxes offering contrast. The counters are a visually heavy marble, the appliances are all high-end and there’s trendy subway tile for the backsplash.


The master bedroom still retains its clean lines, and provides access to the backyard. The master bath features  a rare in-room vanity, which has recently been redone to include more marble counters, under mounted sinks, and more subway tile. The soaking tub and commode area are actually pretty interesting, with appropriate mosaic tile selected for the flooring, a frosted glass wall adding privacy for the commode, and a reeded-glass privacy window in front of the tub.

Of the three secondary bedrooms, one has a small loft added above the closets, taking advantage of the voluminous ceiling space. The hall bathroom is finishes in similar style as the rest of the home, carrying forward the traditional themes with more subway tile.  Out back there’s an in-ground curvilinear pool, an elevated concrete deck, and a generous grassy area.


The home is definitely not lacking on quality, and reads as an interesting and confusing architectural mix between modern and traditional. The renovation doesn’t quite respect the architectural style of the home, and makes the property feel heavier than what the original design intent was. It’s better than a teardown, and can always be restored over time. If you’d like to see more photos, including those of what the home looked like with its original kitchen and baths, check out the Zillow link below.

Or Zillow here for lots more pictures of the original home: 5443 Avenida Fiesta
Posted by Krisel Connection at 6:00 AM