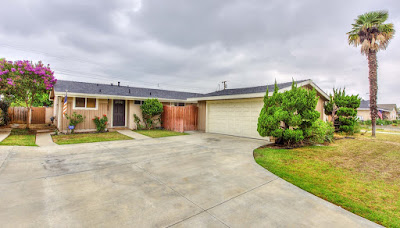 So far we’ve found a total of three Palmer & Krisel-designed neighborhoods from the mid 1950’s in Whittier, California, and out of those three we’ve only found out the name of one of them, Bartley Grove Estates, in West Whittier. This neighborhood we originally thought to be Allied Gardens, but turns out that’s a bit more north in Hacienda Heights. Until we can track a name down, we’ll call this neighborhood ‘East Whittier’, with todays featured home measuring in at an original 1,334 square feet, including three bedrooms, two bathrooms and a two-car garage on a nearly 6,300 square-foot lot.

There’s been some modifications that a previous owner performed as part of a ‘flip’ back in 2012, which unfortunately removed many of the original Krisel hallmarks. The front of the home incorporates a mix of stucco and board and batten siding. Unfortunately, when the windows were replaced custom aluminum replacements weren’t selected, and a chunky white vinyl window that was significantly taller than its original predecessor was placed next to the front door, interrupting the ¾ height board and batten accent siding, a feature that originally ran straight across, creating a visual draw to the window that was never meant to be.


Upon entering the home, visitors walk through the long entry hall and into the living and dining room which overlooks the back yard. The open, beamed celotex ceiling has been drywalled over, and can lights have been added throughout the home. The floor to ceiling windows which once graced the rear wall have been replaced with ¾ height windows which add somewhat unusable wall space and limit light flow into the home. The fireplace has been ‘normalized’, with a traditional mantle and surround, replacing what was once a mid-century hearth-to-ceiling stacked flagstone mantle-less centerpiece. Oftentimes, when people (former flippers in this case) don’t understand a style, they do their best to ‘normalize’ things in their mind, often at the cost of significant architectural details.


The long galley kitchen sits just off the dining room at the east end of the home. The cabinetry and counters aren’t architecturally the style of the home, the product of the 2012 flip, along with the big-box store style backsplash. One of the big losses that happened during the 2012 renovations were the loss of the clerestory windows, which significantly cuts down on the natural light which flows into the room, along with the replacement of the floor to ceiling dining room window with a half-height unit, chopping up the space and limiting what makes midcentury modern so great – a blending of the indoors with the out.

Another interesting architectural detail which has been removed was the large soffit which spanned between the kitchen and living room, which housed uplighting and created spatial distinction. All these features are restorable; however it is somewhat senseless as to why they are removed.


The master bedroom is currently set up as a children’s play room, and has been reconfigured from it’s original design, but still retains a sliding glass door to the back yard. The other two bedrooms are pretty minimal in size, and their large, linear windows have been replaced with chunky vinyl double hungs, which read older than the style they replaced. The bathrooms have both been redone in a style that matches the renovations to the home, but not the architecture.

The backyard has a large covered patio space and open, green lawn, with two small trees at either end of the yard. While the modifications made by a previous owner to this home didn’t take into account the architectural style of the property, the good news is that it’s all reversible. It’s just a matter of finding a new owner who understands modernism and is willing to put in the effort. The home is clean, and offers a good opportunity for a new owner to move right in to a 60-year old property without having to immediately replace everything, which these days is getting harder and harder to find.