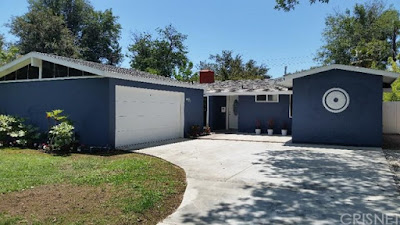 Built in 1956 the Northridge West subdivision features some great Palmer & Krisel-designed residences built by the Cal-Frank Homes company. Todays featured home is a flip, originally selling for $405,000 back in March, this 1,953 square-foot home includes four bedrooms, two and a quarter bathrooms with a two-car garage on a 7,500 square-foot lot with a new asking price of $599,000.

The home features a front-yard addition which bumps up the square footage somewhat from the original. The front addition changes the original design intent of the façade of the home, and adds a small-scaled protrusion that has a curios white bullseye on the streetside view. This bullseye is a new addition, replacing what was up until recently a window – we’re not sure if stucco bullseyes are a new ‘thing’ or if someone got creative, but it’s an easy remove if the new owners don’t like a massive target on the front of their home.

The garage was once detached from the home, and now offers an interior connection off of the living room. This connection eliminates the window that would have originally been provided in the kitchen where the sink is located; however, this issue has been resolved through the addition of a skylight.

The flippers chose not to play up the midcentury design style of the home, and instead opted for more of a heavy, traditional look. The front door is Victorian in design, and is a curious choice for a mid-century contemporary. The interior floors are actually an appropriate light ash color, and works quite well with the style of the home.

The living room sits at the back of the home, and would have originally overlooked the backyard. Another addition has been placed at the rear of the home, through where the original sliding glass door and floor-to-ceiling windows would have been. This addition darkens the home quite a bit, and cuts off quite a bit of natural light from entering the living areas. The fireplace has been covered in stacked stone veneer – a choice often made by flippers as an attempt to create an updated look, but the stacked stone covers what would have been a signature Krisel fireplace, which is a signature design piece now missing from the home.


The kitchen features big-box store raised-panel cabinets topped in crown molding, which offers a heavier, tradition look rather than acting in response to the contemporary style of the home. The clerestories still seem to be intact on the side of the home, which provides ample natural light for the bedrooms. The bathrooms have all been updated, finished in big-box store style materials, with traditionally-styled vanities and mirrors and neutral beige tiles for tub and shower surrounds. Curiously, two finishes – nickel and oil-rubbed bronze, are utilized on fixtures in the bathroom.

The additions on this home darken it quite a bit, and some of the heavy finishes help to give the home a heavy feeling. Dark paint, dark fireplace stone, chunky, ornate moldings around the windows and baseboards, and chunky vinyl windows cut down on light let into the home. It’s clean, move in ready, in a great neighborhood, and can always be restored over time.

Or Realtor.com here: 19924 Acre Street
Posted by Krisel Connection at 6:00 AM