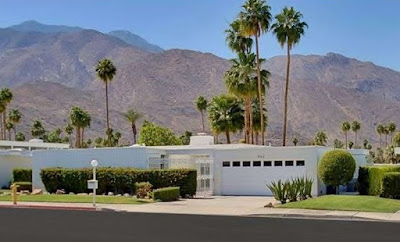 Situated in south Palm Springs, California sits the late mid-century modern condominium development of Kings Point developed by Bob Grundt between 1967-1971. This particular unit was completed in 1969, and features two bedrooms (originally three) and three bathrooms in 2,500 square feet on a 6,500 square-foot lot with an asking price of $675,000.

The entryway features a striking trellis structure which provides dramatic shadow lines in the entry courtyard. The entry opens up into the expanded living room area, which sits at the back of the home and gains it’s cavernous layout from claiming the original master bedroom, currently used as a dining area. The living and dining areas offer walls of glass to the north-facing common area, along with views of Mount San Jacinto. The cavernous living room currently features two sitting areas, and a dining area at each end of the room.  Opposite the rear windows the living room is anchored by a large, horizontal fireplace lined with mirrors maximizing opposite views.


The kitchen has been updated, and features composite counters, stainless steel appliances and glass-tile backsplashes lining the walls, and is tucked off to the side of the home. There’s also a small breakfast nook placed at the rear of the house, bringing the total number of interior eating areas of this home to three.

The two bedrooms each feature their own bathrooms, and function as masters which are positioned at the sides of the home.  The hall bathroom features an interesting original piece – the built-in toilet paper holder and magazine rack combo unit. All three bathrooms have been updated, and feature natural stone, a naturally-lit step-down shower in one bath, and a soaking tub and dual vanities in the other.


The backyard consists mainly of patio space that extends the length of the home, offering three distinct seating areas off of the living, dining and breakfast nook areas. While much of the furnishings in the home read traditional, this is a great piece of later mid-century modern architecture that is priced lower than many of its competitors, allowing the opportunity for renovations or restoration of the original layout.

Or Zillow here:  962 East Murray Canyon Drive
Posted by Krisel Connection at 6:00 AM