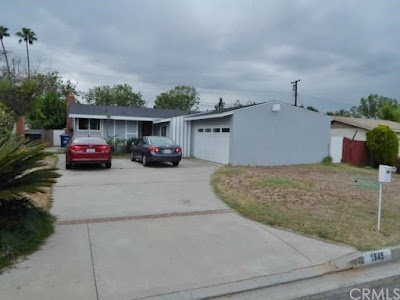 After a little digging last week we were able to uncover the Palmer & Krisel-designed neighborhood of Allied Gardens, built in 1955 by builders Bollenbacher & Kelton. This particular midcentury home features four bedrooms and two bathrooms in 1,699 square feet with a two-car garage on a 6,100 square-foot lot with an asking price of $530,000.

The home has been expanded from its original 1,200 square-foot floor plate with additions between the main home and the formerly detached garage and a small extension that extends off of the rear of the home. This home was the victim of a flip in 2012, which saw bathrooms, kitchens and windows updated, including removal of the signature clerestories.

The front of the home reflects still retains its general Krisel exterior, with modifications reflective of the addition that was put on between the garage and home sometime in the 1970s. This addition removed several of the front windows and modified the roofline, but luckily doesn’t significantly alter the overall aesthetic of the property.

Like most Krisel homes, the kitchen sits at the front of the home while the living and dining rooms site at the back. The kitchen has been opened up to the entry hall and living room, leaving little room for spatial division and in-home privacy. The kitchen features traditional big-box store style cabinetry that is more traditionally-styled than the contemporary architecture of the home, and like most flips, sports granite countertops with stainless steel appliances.

As the clerestories have been removed, the kitchen and living rooms show much darker than originally intended, and the rear addition adds square-footage onto both the dining and living rooms yet cuts the quantity of light entering the living areas.


The Master Bedroom shows fairly cluttered, but like many Krisels this wasn’t a large home, and used tricks like open beamed ceilings, floor-to-ceiling windows and clerestories to open up space. Unfortunately all of these have been removed, so rooms show tighter and smaller than planned by the architects. Both bathrooms have been renovated in a very generic style indicative of materials found at do-it-yourself stores. The secondary bedrooms are positioned at the back of the home, and show as tight as the master bedroom.

The backyard is fairly simple, consisting of two large concrete pads and a small grass/landscape area, and loses some square-footage due to the addition off of the living room.  Overall this home could be a really worth renovation, with lots of room to restore defining elements which have been watered down over the years.

Or Realtor.com here: 1645 Matchleaf Avenue
Posted by Krisel Connection at 6:00 AM