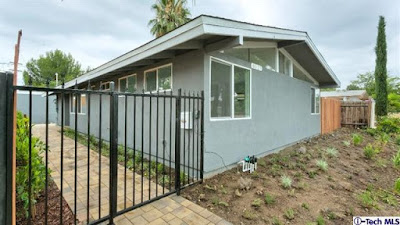 Here’s one of the very first single-family housing tracts that William Krisel and Dan Palmer partnered on in 1953. Palmer & Krisel began their partnership in 1950, the same year Krisel received his architecture license and initially pursued custom home design; it wasn’t until a couple of years later that they began tract-home design. This tract, known as the Tampa Homes, sits on Tampa Avenue in Reseda and consists of only 12 houses built by Dunas, Greene & Dunas and designed when Krisel was only 29 years old.

This 1,296 square-foot home was a recent flip that was purchased back in September for $275,000 and completely renovated. The home includes three bedrooms, two bathrooms, a rear-yard carport all on a 6,100 square-foot lot with a current asking price of $449,000.
The 12 Tampa Homes all feature side entrances, and sit well above busy six-lane Tampa Avenue. The front of this home has been restored, having a previous layer of clapboard siding removed and replaced with period appropriate sand-finish stucco. A flight of concrete steps leads visitors from Tampa Avenue up to the black wrought iron entry gate, which while functional, gives a slightly institutional feel upon entering the home.

The entry walk is paved in freshly-laid pavestones, which read less mid-century modern and more suburban traditional, but are still a nice feature and a great effort on the part of this home’s flipper. The front door isn’t quite suited for the home, as its leaded glass and raised panels are better suited for English Cottage; however, an appropriate modern replacement is a relatively simple fix, with more and more modern options available at big-box stores, such as Builder’s Choice from Home Depot or Therma Tru from Lowes.

The great room concept has been applied to this home, with no demising walls between the kitchen, living or dining rooms which creates one large, cavernous chamber. Usually Krisel homes incorporated a well-designed balance between spaces – allowing division while still providing an open flow. Most likely there would have been a demising wall separating the foyer from the kitchen, giving privacy to the home and shielding guests from views of the food preparation area. As the demising wall has been removed, guests now enter the home and walk right into the kitchen island while the refrigerator is the last thing guest see upon leaving.

The kitchen has been fully updated, with bright white cabinetry, stainless steel appliances, and a well-chosen composite countertop with undermount sink. The crown moldings are questionable, as they pull from east-coast traditional styles as opposed to California modern, but potentially are an easy remove. Stainless steel backsplash tiles compliment the appliances, counters and flooring.

As with most Palmer & Krisel homes, there’s a fireplace anchoring the living room. Usually there fireplaces incorporated a simple, modern design and rarely reflected ‘traditional’ forms. This fireplace has received a more traditional makeover with a beefy tiled surround and mantle, two things never found on a Krisel fireplace. The living room provides access to the backyard through large period-appropriate slider. Off the living room and adjacent to the entrance is a curious room – a former fourth bedroom which has been converted into an open corral of sorts. Removing the wall allows more light to flow through the home but leads to a loss of flow and creates unusable open space.


Both bathrooms also reflect the recent upgrades, and along with new fixtures, feature a ubiquitous staple of modern makeovers – the ever-popular Ikea Godmorgon bathroom vanity! Both master and hall bath feature tubs which have had their surrounds tiled in large floor tiles, and both feature brushed nickel towel racks and hook, which contrast against the chrome finished tub and sink fixtures. Matching small details like this would significantly help the space read consistently.

Like many Krisel small homes, the bedrooms aren’t huge, but do feature generous windows which help add natural light to the spaces along with clerestories which serve the master and secondary corner bedroom.  If you like can lights, you’re in luck – they’re everywhere in this home. Krisel homes were always typically lit by plug-in lamps, rarely having more than a few ceiling-mount light fixtures, so we understand the desire to put in additional fixtures, but the quantity found in the home is borderline excessive.

The backyard essentially is one large patio covered in the same pavers that greet visitors at the front gate, tree-less and devoid of shade with a strip of grass running along the entire length of the side yard. The carport is accessed from the adjacent rear alleyway and features a small storage enclosure. Overall the home reads as a nice, clean package that incorporates a general theme of modernism with lots of other styles thrown in. It’s those other styles and gimmicks that confuse the property, wash away the modernist Krisel lines, and take what could have been a really successful, eye-catching and respectful mid-century modern makeover into what instead is an above-average flip with an expensive kitchen. At least they didn’t paint it beige.


Check out Redfin for the listing and more photos here: 6529 Tampa Avenue

Or Realtor.com here: 6529 Tampa Avenue
Posted by Krisel Connection at 6:00 AM