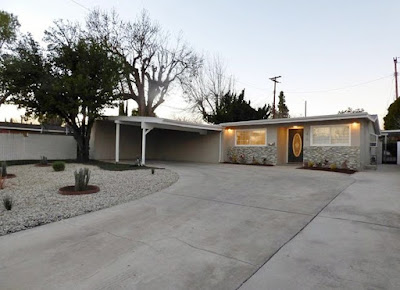 Recently listed is this 1954 Palmer & Krisel-designed home in Bermuda Woods which has been freshly flipped. The home features four bedrooms and two bathrooms in 1,742 square feet, an in ground pool  and sits on an 8,900 square-foot lot with an asking price of $599,000.

Last sold in the fall for $432,000, this midcentury modern home has been cleaned up and been given a heavy traditional make-over. Out front, a new water-conserving landscape has been installed, with random plants scattered throughout the yard. The low walls which offered privacy to the carport have been removed for some reason, and trendy horizontal stone veneer tiles have been added to part of the front façade. One of the more positive changes that has occurred to the exterior of the home was the removal of the ductwork from the roof, which was visible from the street.


The flippers have decided that a Victorian-style front door best suits this midcentury house, which leads into a long entry hall which has been floored in light ash laminate. This home is same floorplan as we just saw in Corbin Palms two weeks ago, with the living and dining rooms at the rear of the home, the kitchen sited along the east side of the home, and all four bedrooms on the west side of the home, two at the front and two at the rear.

The original hallmark Krisel open-beamed vaulted ceilings have been drywalled in, most likely in a quick fix-it attempt to hide electrical and new HVAC ducting. And can lights – lots and lots of can lights, a requirement of any flipper. The kitchen has been renovated with white shaker-style cabinets with an over-sized crown molding cap. Composite counters, stainless steel appliances and of course subway tile rounds out the room. The original clerestory windows above the cabinetry has been sacrificed for an unknown reason, resulting in a darker, more closed-in room.

For asking top dollar for a flip, there’s no photos of the bedrooms for some reason, so no telling what they look like (same goes for the living room - you’d think folks would want to put slightly more effort into selling a home). The hall photo provided indicates that traditional, raised-panel doors have been added along with a Victorian-style light fixture complimenting the front door in design style.

Both bathrooms have been updated with Ikea vanities and cost-saving floor tiles utilized in the tub and shower surrounds. At least the vanities are floating, which are one of the only modernist-based aesthetic choices that actually reflects the architectural aesthetics of the home made by the flipper.

The backyard contains a large covered patio off of the living and dining rooms, and a large, rectangular pool sits at the center of the yard. Fresh outdoor carpeting in the form of synthetic turf has been rolled out in the yard, and a small shed sits at the corner of the yard.

This one was tough to love – perhaps because with a little bit of research better-suited aesthetic choices could have been made. The property could always be restored, just at the current price point restoration becomes a long-term project. At least it has a pool. Hopefully this home will fall into the hands of someone who undos much of what has been done and restores the original character of the property.

Check out the full listing on Redfin.com here: 19419 Lorne Street

Or Zillow.com here: 19419 Lorne Street
Posted by Krisel Connection at 6:00 AM