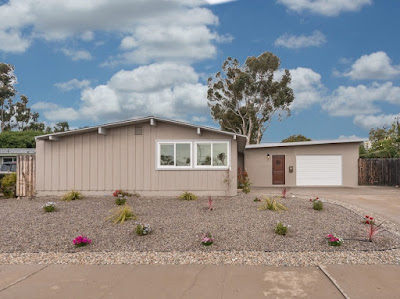 Built in 1957 is this Palmer & Krisel-designed home in the neighborhood of Cabrillo Village in northern San Diego, CA. Just discovering this neighborhood the other day, the homes all appear to be small, approximate 1,100 square foot three bedroom homes consisting of two alternating floor plans with varied elevations. The floor plans appear to be three-bedroom hybrid versions of plans found in Pomona’s Valwood Estates (and elsewhere in other Krisel-designed communities) with many design traits indicating that these homes were aimed at affordability and entry-level buyers.

The homes appear to have no real ceiling insulation, similar to some of the Krisel homes we’ve seen in Garden Grove and West Covina, as evidenced by the thin fascias. Open beamed vaulted ceilings are found on the interiors of these homes, and many still feature a signature modernist Krisel fireplace. Some include signature four-pane floor to ceiling windows, while other feature front windows that begin at the 2/3 or ¾ proportion of the front wall.

One feature lacking within this community is the presence of clerestory windows, which potentially may have been a cost-cutting measure at the time of original construction. Most likely these homes were built by Lealand Builders and the Drogin Construction Company, and mark one of the handful of San Diego Palmer & Krisel communities I’ve been searching for quite some time - there's still a couple of others out there the I'm hunting for - now if I could only find Martin Manor and Terra Terrace...


This particular home is an expanded flip, and features three bedrooms and two bathrooms in 1,684 square feet on a 6,500 square-foot lot with an asking price of $559,900. The breezeway between the carport and main home has long been enclosed, and on this home is currently being utilized as a living room. The original living area sits at the back of the home, and overlooks the backyard. Unfortunately the signature modernist fireplace on this home has been ‘normalized’ with a low-profile travertine hearth and surround.


The demising wall between the kitchen and living room has been removed, a common move found in this home’s Valwood Estates doppelganger and a hallmark of flippers pushing ‘open concept’ living. The kitchen features dark, dark shaker-style cabinets with cartoonishly ornate upper molding, composite counters and stainless steel appliances.

The master bedroom sits at the front of the home, and the adjacent master bath features cabinetry and counters which match the kitchen, oil-rubbed bronze hardware popularized last decade, and floor tile on the tub surround. The guest bedrooms sit on the side of the west side of the home and overlook the side yard, and the guest bath has been given an identical treatment as the master bath.

The backyard has been fully covered in new turf, and a large concrete patio with built-in barbeque sits off the living room and kitchen area. Shrubs and a specimen cacti line the well-worn and ageing wooden fence, and a small pergola covers a miniscule portion of the patio.

Despite all of the flipper hallmarks, right down to the beige paint and white-trimmed baseboards, Redfin predicts this midcentury home will sell fast, so be sure to check this one out while it’s still available.

Check out the full listing on Redfin.com here: 8564 Dubonnet Street