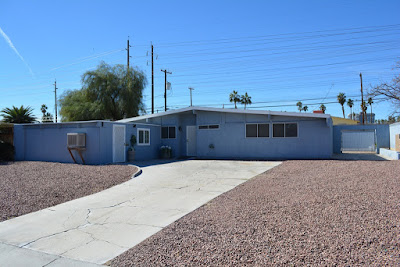 Built in 1963 by Paradise Homes is this 1,650 square-foot Palmer & Krisel-designed home in Las Vegas’ midcentury mecca of Paradise Palms. This home features an in-ground pool on an 8,200 square-foot lot and comes with four bedrooms and two bathrooms in approximately 1,250 square feet; the remaining 400 square feet are found in a permitted enclosure of the original two-car carport, with an asking price of $163,000.

This home has been on the market for quite a while, as it has several flaws that buyer’s aren’t overlooking, mainly a high asking price, mismatched kitchen cabinets, a 400 square-foot addition that can’t be accessed through the main home, a strangely paneled living room, no covered parking and no living landscape. But for those who can see the bones of the property, they’ll recognize that there’s enormous potential with this home.

As previously mentioned, the exterior of the home has no live landscape; however there’s a fantastic opportunity to view this as a blank slate ready for a modernist makeover. The home itself has great original form, with great lines that just need a bit of cleaning up, including removing the paint from the original front clerestories.


Inside, the kitchen sits to the left of the entry while the living and dining rooms are at the rear of the home. The kitchen features a combination of well-worn painted original cabinets and raised-panel replacements, laminate counters and stainless steel appliances. The globe light in the kitchen is also original, and definitely worth saving. The laundry and breakfast nook sit tucked off to the side of the kitchen, and the floor-ceiling windows have been shortened, cutting down on the amount of light entering the room.

The living and dining overlook the backyard and swimming pool, and for some reason the signature Krisel-modernist fireplace has been boxed in and converted to a wooden entertainment center. More clerestories have been removed in the dining area, and wood paneling surrounds the room.

Two bedrooms sit at the front of the home while two sit at the rear. Both bathrooms have been paneled on more wood; interestingly, one bathroom actually uses laminate flooring as the wall material. One bathroom contains a newer, tiled stall shower, while the other incorporates its original sunken bathtub. All four bedrooms are extremely modest in size and many times with this floorplan, which is seen in earlier Krisel versions in Valwood Estates in Pomona and in Santa Ana, two bedrooms often get combined into one larger master.


The carport has legally been converted into habitable living space, yet still resembles its origins as automobile storage. There is no interior access between this converted room and the home. Conversion back to a parking structure should be a rather straightforward process, and beneficial to the future homeowner.

The backyard contains the large in-ground pool, patio space, and red gravel. There’s no vegetation or natural shade, and no real ‘flow’ to the space.

There are lots of cosmetic issues with this property, but many are simple fixes that could be remedied over time. There’s tremendous potential in this home – it’s got great bones, beautiful lines and a blank slate for the yard. It’s just waiting for the right visionary to breathe new life into it.

Check out the full listing on Redfin.com here: 3139 Sundown Drive

Or Zillow.com here: 3139 Sundown Drive
Posted by Krisel Connection at 6:00 AM