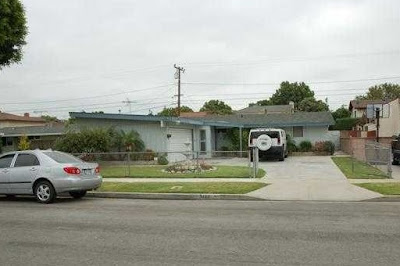 In North Long Beach, CA sits a neighborhood of approximately 200 modest-sized Palmer & Krisel-designed midcentury modern homes on efficient +/- 6,000 square-foot lots built in 1955. Todays featured home lies within that neighborhood off of Downey Avenue and has been expanded to 1,768 square feet, incorporates three bedrooms (originally four now converted to three) and two bathrooms with an in-ground pool and a two-car garage all on a 6,000 square-foot lot with an asking price of $510,000.

Unfortunately the photos submitted do not show the home in its best light; in fact there are no photos of the bedrooms or bathrooms, which is probably one of the reasons that this property has been sitting on the market for a little while. The front of the home is fenced in with chain link, and features a grassy front lawn with shrubs at the base of the garage. The garage features a distinctive shed roofline that we’ve seen on dozens of other Krisel-designed subdivisions throughout southern California.

The front of the home has been modified with an addition where the service porch once stood, and now encloses the area between the garage and main structure with a new entryway. There’s also a second addition at the rear of the home which occupies much of the backyard area that isn’t currently occupied with the swimming pool.

Inside, the living, kitchen and dining all sit on the east side of the home and all appear to be the beneficiaries of the additions. The living room once would have overlooked the backyard, but now appears to serve as an access point to the family room addition at the rear of the home. The original fireplace is still intact in the living room, however it’s once distinct modernist lines have been toned down with a tile surround.

The dining room sits at the entry to the kitchen, and still features its original clerestories letting in lots of natural light. The kitchen also features its original clerestories, and features laminate cabinets from a late 1980s update, tile counter tops and white appliances.  The laundry room is an addition that connects the kitchen to the garage, which eliminates many of the original north-facing windows that the home once had.


The condition and appearance of the three bedrooms and two bathrooms are anyone’s guess, as the listing agent chose not to show photographs of those areas. Most likely the bedrooms are modest in size, and two would have originally been located at the front of the home and two at the back. The backyard is generally all swimming pool and hardscape, with limited planting and no trees.

This modernist home definitely needs some TLC and some of the modern put back into it, but it’s a great opportunity for anyone looking for a modest sized mid-century pool home in the Long Beach area.

Or Zillow.com here: 3460 East La Jara Avenue
Posted by Krisel Connection at 6:00 AM