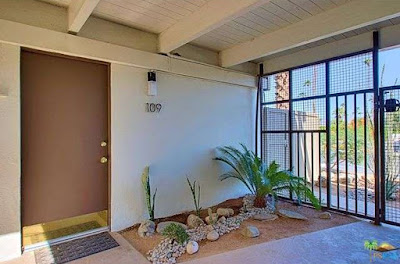 It’s been a while since we’ve seen a condominium unit at the Palmer & Krisel-designed Ocotillo Lodge hit the market. This 525 square foot unit incorporates one bedroom, one bathroom and an tranquil private ground-floor patio with an asking price of $184,500 and monthly HOA dues of $361.

This unit incorporates the best of both worlds – classic mid-century architecture and modern renovations performed with respect to the traits that made mid-century great – clean lines, minimal ornamentation and lack of excessiveness.

As this is a two-room unit like most others at the Ocotillo Lodge, minimalism is important. The living room features those signature Krisel-walls of glass, sliders which access the private patio. Unfortunately the open beamed ceilings appear to have been replaced with can lights and drywall, presumably adding an additional layer of sound buffering between the ceiling and upstairs unit, however there is always the potential to restore if desired.

The kitchen has been updated with clean-lined modern cabinetry, white composite counters and efficiency-sized stainless steel appliances. A clean, multi-tonal grey tile backsplash has been added to the walls, giving the kitchen a sleek, modern appearance. The kitchen area also incorporates a small eat-in dining area that lies between the open kitchen and living area.

The single bedroom also incorporates those signature walls of glass overlooking the small patio area. The closets have been updated with opaque sliding doors, while more can lights fill the ceiling. The bathroom has been tastefully updated as well, with multi-tonal warm grey mosaic tiles on the walls surrounding the shower. The ever-popular Ikea Godmorgon bathroom vanity makes an appearance here, which has to be one of the single-most popular cabinet choices for mid-century renovations within 250 miles of an Ikea.


The north-facing private patio has been fully tiled with the same floor covering found throughout the unit, which allows for the seamless blending of the indoors and out. It also creates additional seasonal living space with mountain views, making the unit feel larger than it is.

This is a great example of a well-done vacation home, and a perfect mid-century escape at an affordable price.