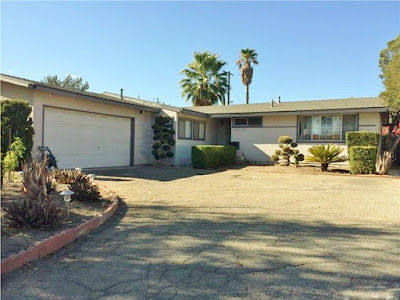 In North Hollywood, CA sits a small enclave of 24 Palmer & Krisel-designed homes which like many Palmer & Krisel subdivisions, sit in various stages of repair, restoration and renovation. This 1954 Palmer & Krisel home has been altered over the years but could make a great restoration project. With four bedrooms plus a den, two bathrooms, a two car garage all on a 7,700 square-foot lot this home comes with an asking price of $549,000.

The home has been modified slightly from its original floor plan. The room utilized as the den was constructed out of the former breezeway space between the (former) detached garage and the main dwelling unit, adjacent to the front entryway. Other modifications include mullioned vinyl replacement windows throughout the home, most noticeably on the front façade of the home. Narrow bands of windows which once helped define the front of the home have now been altered to contain all different window sizes and shapes.


The front yard is drought tolerant, with cacti and succulents replacing thirsty turf. Inside, the home has pretty much had the midcentury modern ‘updated’ out of it, with a few exceptions. The open, beamed celotex ceilings are still in place, as is the striking stone fireplace along the rear living room wall.

The kitchen has been updated with raised panel oak cabinetry, busy granite countertops and chunky stainless steel appliances. The clerestories above the kitchen cabinets have been covered over, however it appears that the glass is still intact, just painted over, which cuts down on the amount of natural light entering the home.


There are hardwood, parquet, and tile floors throughout the home and in the bedrooms and bathrooms. The bedrooms on the ends of the home still luckily feature their exposed original clerestories, while the ‘den’ addition between the main dwelling and the garage is accessed through one of the bedrooms.


Both bathrooms appear to have been updated at some point in the early 1990s, with materials that aren’t reflective of the modern roots of the home. The backyard appears to be utilized as a full cactus and fruit tree garden.

This home, while centrally located, is in need of having the midcentury modern put back into it. Several other homes on the street still retain their original character, and this one is going to take some creativity, some vision and a lot of time to bring it back to its modernist splendor.

Check out the full listing on Redfin.com here: 12739 Hartland Street

Or Zillow.com here: 12739 Hartland Street
Posted by Krisel Connection at 6:00 AM