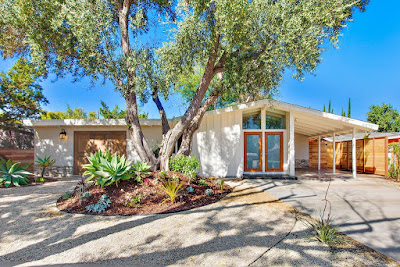 Built in 1955 is this freshly flipped Palmer & Krisel-designed home back on the market with a major makeover in the Woodland Hills, CA neighborhood of Corbin Palms. Last sold in January for $495,500, this home includes four bedrooms and three bathrooms in 1,926 square feet on an 8,800 square-foot lot and carries a new asking price of $779,000.

Built by the Alexander Construction Company, this Palmer & Krisel home was expanded in 1967 with an addition that maintains the original proportions of the home. The flippers have cleaned up the front of the home, but have added typical ‘flipped’ materials to the façade that are out of character with the modernist roots of the home. A pair of overly flourished coach lights have been added to the front of the home, Tuscan solid-panel doors have replaced single paned French doors on the flat-roofed addition. The mix of styles doesn’t stop there – apparently the carport needed a ¼ height row of thin stone veneer at the base.

Inside, the living, dining and kitchen have received the great-room makeover, which may look visually appealing at first but actually reduces privacy and makes space feel smaller than they actually are. The open beamed vaulted celotex ceiling are still in place, adding height and volume to the space, while the original modernist fireplace has been dramatized a bit, with a wide surround which makes the proportions of the opening appear more gaping than it is.

The original floor to ceiling sidelight window at the front of the home has been cut in half for some reason, and swapped from a single-pane window to a narrow slider, which alters the intended proportions of the home, along with the views. The kitchen has been remodeled with traditional raised-panel cabinetry, brown composite counters and glass subway tile backsplashes, which like the front, combines a mixture of styles that don’t quite capture the modernist style of the home.

The bathrooms both feature vanities which emulate the same styles as found in the kitchen, and the tub/shower surrounds have been tiles in marble and mosaic tiles. There’s only one photo of a bedroom shown, which appears to luckily maintain its original modernist aesthetics, sans the dark, heavily grooved laminate floors.

Apparently $285,000 doesn’t buy backyard landscaping, as the rear yard has been left unfinished; which is beneficial for those who are creative, but slightly insulting to be expected to pay top-dollar for a home that needs work. A large uncovered concrete patio sits off of the kitchen, and more ¼ height thin stone veneer has been added to the exterior wall adjacent to the patio.

This home looks great at first, but when reviewing the additions and modifications made during the flip, it’s apparent that those doing the work didn’t understand what they had. There’s always hope for a more modernist restoration, but at least this property offers a move-in ready home.

Check out the full listing on Redfin.com here: 6213 Lubao Avenue