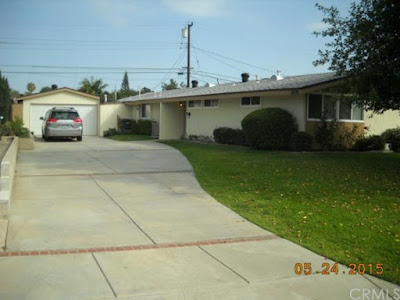 New on the market is this 1955 Palmer & Krisel-designed home in the Parkwood la Mirada subdivision in La Mirada, California. Built by the Devon Construction Company, this home features three bedrooms and two bathroom in 1,958 square feet all on a 6,700 square-foot lot priced at $525,000.

This property is an interesting variation on the mid-century Palmer & Krisel floor plans – rather than stretched to the width of the lot, this home essentially runs from front-to-back, with the two-car garage sited at the rear of the property. This variation does a couple of things – it pulls the entryway pretty far off the street, and create a very long driveway. Great if you’ve got lots of automobiles or want a large surface area for outdoor sporting activities, but makes for a very long expanse of hardscape that occupies a large chunk of the yard area.

This set up also eats into the backyard pretty deeply, essentially leaving it as nothing more than a large patio area. There also is a rear addition that really cuts this space down, but increases the square footage of this home to nearly 2,000 square feet. Inside the home has been renovated, leaving very few signature Krisel trademarks behind. The renovations aren’t terrible, but the loss of the clerestories at the front of the home help darken it a bit.

It also appears that the open beamed ceilings have been covered over with wood planks, most likely to accommodate additional insulation, electrical to support the added ceiling fixtures, and to support a seamless transition between the original home and the rear addition. The fireplace has been bricked over, most likely a mid-70’s addition, and an arch has been added over the opening. The bedrooms appear pretty standard, and the living room features the most pendant lights that we’ve ever seen in one place. This is an interesting property for sure – not very original but it’s got some great lines.

Or Zillow photos here: 14342 San Feliciano Drive
Posted by Krisel Connection at 6:00 AM