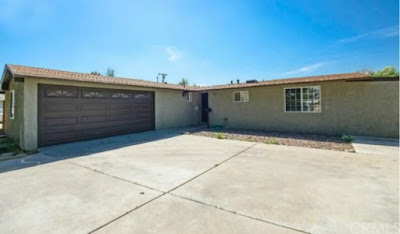 It just so happens that there’s two 1953 Palmer & Krisel homes for sale right now in the Parkwood Covina. Yesterday we saw a 1,400 square-foot four bedroom home that needed a little renovations; today’s home is freshly renovated – clean, yet livable – but stylistically off the mark. This Krisel is a three bedroom, two bathroom home in 1,270 square feet with a two-car garage on a 7,400 square-foot lot, with an asking price of $479,000.

The entry door is the standard Victorian-style door found at most big-box home improvement stores. The living, dining and kitchen have all been expanded into each other for the great-room concept that is currently popular in new construction. The kitchen is one of the stranger ones we’ve seen in a while – it’s been opened up, but two support pillars have been added on either side of the island, but they don’t quite line up or touch anything. The ceiling has been lowered, having it’s exposed beams filled to accommodate can lights, and a microwave shelf has been added accommodating an ill-fitting appliance.

The signature Krisel fireplace has been ‘updated’, and now reads as a mere box on a wall. The sliders and trademark walls of glass leading to the back have been converted to French doors – another flipper hallmark. Laminate floors have been installed throughout the home, as have raised panel doors, boob lights and plenty of thick, white molding. There’s no sign of the clerestories that would have flanked the sides of the home – they most likely have been updated away.
The home is definitely livable, but compared to the other Palmer & Krisels that have been features here there’s definitely a marked difference in character when comparing this Krisel to others. There’s opportunity to create character here, we just wish these flippers knew what they had before they ‘modernized’ it.

Check out the rest of the photos on Redfin here: 317 South Lark Ellen Avenue

Posted by Krisel Connection at 6:00 AM