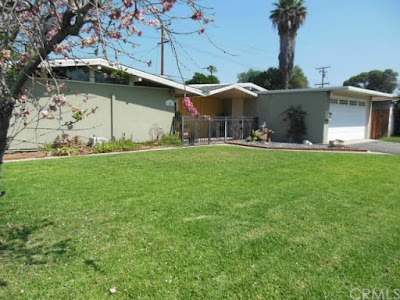 In 1953 the Devon Construction Company began work on the Parkwood Covina housing development in West Covina, California which included several Palmer & Krisel-designed homes amongst several traditional mid-century style homes. This subdivision gives us a great glimpse of the early Palmer & Krisel homes and home styles, styles that were being constructed around the same time as the San Fernando Valley’s well-known Alexander-built 1953 Corbin Palms tract.

This 1953 West Covina home features four bedrooms and two bathrooms in 1,488 square feet on a 7,200 square-foot lot with an asking price of $458,888. This home has been modified over the years to incorporate a more generic design style, which does not embody the modern aesthetic of the home’s design origins.  The front exterior of the some seems to have been modified somewhat – from a review of other similar homes in the area is appears that the small angled roofline above the entryway has been added.

Inside there’s still a few Palmer & Krisel architectural hallmarks still left that haven’t been updated out of the property. The signature clerestory windows are all still in place; the tongue and groove open-beamed ceilings are still intact, and the trademark fireplace is still intact (albeit original stonework has been painted over). The garage appears to be original (the garage door is not) and the room layout appears to be as originally intended.

The kitchen and bathrooms have been updated in a style that evokes the do-it-yourself stores; and like many homes there’s a variety of flooring styles, mainly consisting of fake wood and several ceramic tile styles. This particular tract was not built with central air conditioning as a standard feature, and this home features added wall-mounted units with a separate built-in central wall heater.
The backyard features plenty of room and adds a slightly mod pavered patio area. There’s also some low maintenance gravel, and an enter-at-your-own-risk covered patio.


While many of the cosmetics in this property don’t directly compliment the modern architecture of the home, there’s a great opportunity here to bring out the modern elements of this property with some minor modifications.

Or Realtor.com here: 1441 East Holly Oak Drive
Posted by Krisel Connection at 6:00 AM