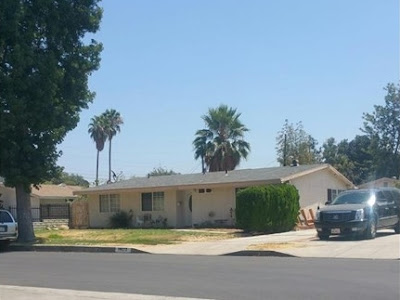 Built in 1955 by Midland Properties is this Palmer & Krisel-designed home in Mission Hills, CA in the San Fernando Valley in desperate need of help. With four bedrooms and two bathrooms in 1,247 square feet, this home sits on a 7,300 square-foot lot and carries an asking price of $425,000.


This north facing home sits behind a patchy front lawn with a large, columnar street tree at the front curb of the home. A Victorian front door sits amid mullioned white vinyl replacement windows while the fascia appears to be in need of TLC. The detached two-car garage sits towards the rear of the lot, and is accessed via a long, linear driveway with a pair of rusty gates guarding access.

Inside, the home is full of stuff. It’s a little difficult to tell what’s going inside, but the floor plan is one that we’ve seen before, with the living and dining rooms at the rear of the home, the kitchen sited along the east side of the home and the bedrooms clustered together on the west side of the home.


There’s no photos of the kitchen shown, but its condition probably isn’t that difficult to guess. The living and dining rooms open out to a rear yard addition, which appears to be tacked on and again filled with more stuff. Most likely the addition isn’t permitted as the square footage of the home still reflects its original 1,247 square feet, and the home would probably be best served with the structure removed. The original modernist fireplace in the living room has been covered with mirrors and other traditional elements.

The one bathroom shown shows that it has been updated at some point, but in its current state the room could use another update. The bedrooms show full, but it appears that the original clerestory windows are intact, as are the original open beamed wooden ceilings. The backyard is cluttered with more stuff, a patchy lawn and features a red brick patio off the addition.

This fixer is a diamond in the rough, and will take a buyer with lots of vision and patience to bring it back to life.

Check out the full listing on Redfin.com here: 14872 Copper Street

Or Realtor.com here: 14872 Copper Street
Posted by Krisel Connection at 6:00 AM