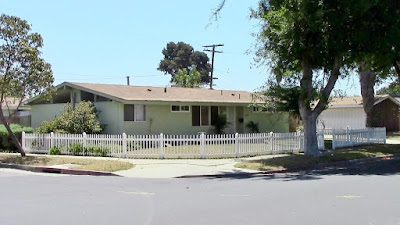 New to the market is this 1955 Palmer & Krisel-designed home in Long Beach, CA. With four bedrooms and two bathrooms in 1,600 square feet and a detached two-car garage, the asking price on this home is $499,000.

The home sits on a west-facing corner lot, with the detached two car garage sited in the backyard and accessed from the north side of the property. Interestingly a white-picket fence was chosen to surround this midcentury modern piece of architecture, which could easily be removed if a future owner wanted to open up the yard and show of the architecture of the home a bit. A pair of large shade trees sit along the western property line of the lot, allowing for passive solar and protection form the western-facing sun.

The exterior of the home contains its great midcentury lines, despite several original windows recently being replaced with chunky white vinyl windows, but luckily Krisel’s signature clerestory windows are still intact at the ends of the home. There’s an addition on the rear of the home adding in the fourth bedroom, as this home was originally a three bedroom in about 1,200 square feet.

Unfortunately the interior photographs of this home are pretty terrible, which is surprising as one would think that good photographs are a significant part of selling a home. Regardless, the floorplan is pretty recognizable, with the master bedroom to the south of the front door, the secondary bedrooms on the north side of the home, the dining nook at the front of the home, and the living and kitchen at the rear of the home along with the 400 square-foot addition.


The bathrooms appear to have been updated with materials that are indicative of a big-box store quick fix, right down to the cost-cutting beige floor tiles utilized in the tub surround. The bedrooms are colorful, and appear to be carpeted in contrast to the laminate flooring found throughout the rest of the home.

The backyard is mainly swallowed up by the addition and rear-yard garage, and contains a small covered patio, a fairly good-sized concrete patio, and a modest sized patch of turf. There are no trees in the backyard, and only a few vertical plantings adjacent to the rear of the garage.

Homes at this price point in north Long Beach don’t seem to last that long, and despite the non-cohesive updates, this home will most likely be gone quickly.

Check out the full listing on Redfin.com here: 6260 Obispo Avenue

Or Zillow.com here: 6260 Obispo Avenue
Posted by Krisel Connection at 6:00 AM