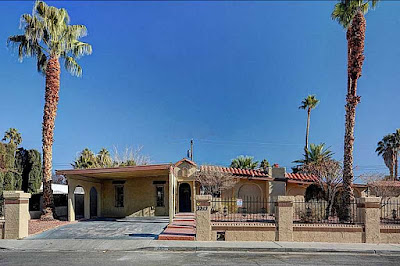 Last featured on the blog in August is this 1962 Palmer & Krisel-designed home in Paradise Palms in Las Vegas, Nevada that’s been modified with a late 1970s Spanish-style influence. Selling a month later in September for $159,000, this home is back as a flip for $219,998. The general layout is the same, featuring four bedrooms and three bathrooms in 2,207 square feet, including an in-ground pool all on an 8,700 square-foot lot.

So what does $60,000 buy you in a flip? From the looks of it, it boils down to lots of beige paint, new kitchen cabinet doors and granite counters, renovated bathrooms, new floors, a cleaned up yard and water in the swimming pool. The pre-flip purchase price was slightly on the high side but could have afforded a new owner to correct some of the non-conforming changes that had previously been done to the home and return it to its modernist roots; however only mild cosmetic changes have been made.

Out front, little has been changed except for the paint color. There could have been a great opportunity to open up the entire yard and enhance the curb appeal of the home by removing the front yard wall and fence, which doesn’t even fully enclose the yard. The red tile roof, purely decorative and added in the late 1970s, could have been removed to re-establish the original form of the roofline, and a little color could have been added to tone down some of the 1970s alterations while playing up the midcentury lines of the home.


Inside, the added master bedrooms sits just to the left of the entry, while the original living room sits to the right. The original clerestory windows above the fireplace remain unrestored, which could have been another design problem solved during the flipping process. Instead, their cutouts remain leaving future owners to make the decision to restore or not. The flooring in this room alternates between laminate and tile, which chops the flow of the room up and makes the space read as slightly off.

The kitchen has received new door fronts on the cabinets, but the boxes appear to retained and stained to match the new doors. Lots and lots of granite has been added, and the funky refrigerator location across from the working kitchen area reamains. The family room still sits off the kitchen, with beige paint added and another funky flooring layout combining laminate and tile to compliment the layout in the living room.

Out back, water has been added to the once-empty pool – hopefully new plaster was added, otherwise the new owners may have some surface issues to contend with. The rest of the yard has been cleaned up, awaiting for a new owner to give it a modernist makeover.

At the current price, a full restoration is a bit cost prohibitive, and the low-cost modifications made during the flip make it hard to justify a $60,000 price increase on renovations that are purely cosmetic, but the home is move-in ready and could make a great long-term project and could serve as a great example of how to un-flip a home.

Check out the full listing on Redfin.com here: 3212 Gaucho Drive